My dad is visiting me in Cape Town.

I have a cool relationship with my dad, but as all family relationships, it is complexed.

My parents met in Greece when my dad was 25 years old and my mom 29.

He was rebelling against his conservative, quite money-focused upbringing in Stockholm. She came from a small country town in the north and was on a holiday with my grandmother.

He was blond, slim (hard to imagine today 😉 tanned and worked with the local fishermen. She had long, dark hair, brown eyes and a gorgeous white smile. They fell in love and spent the evenings skinny dipping in the moon light.

I didn’t take long until my dad had moved to the small town in the north. And within 2 years they had bought a pink house, gotten married in Paris and had two little blond children, me and my brother. But the fairy tale didn’t include long work hours, lack of acknowledgment, stress and miscommunication. A few years later dad moved into an apartment down stairs, and then out of the small town. Me and my brother never suffered of this though. On the contrary, I have never heard my parents argue and they remained in good contact with a common interest: love for us children.

As far as we were concerned life was one exciting journey with people’s open arms wherever we turned.

The following years mom would safely assure we got on the flights or the buses, or the trains, or the occasions that dad drove up to fetch us, we’d sit on the big rock at the hill expectantly searching for his yellow Mercedes down the road. When he came around the bend he’d honk the horn and we’d jump up and down and run to meet him.

Dad lived in 8 places in the following years. He was married three times and me and my brother had a wonderful baby sister. Since dad was a chef in a fast changing business he would have new workplaces all the time. Sometimes he brought us into the kitchen and I still remember the distinct smell of groceries and disinfectants. And the hard, checkered concrete floor.

As time passed, me, my brother and sister would easily adapt to whatever situation he was in, where he lived and with who. He was always there for us, in other ways than financially. We were good friends and even though we didn’t know it at the time, he had a great influence on us. He opened us up to his life and would easily express his emotions and thoughts. But at the same time, it was very often about him. I don’t mean this as criticism, I know I can be self-absorbed as well (aren’t we all) but sometimes I would feel misunderstood. And all I wanted was his approval of things. I don’t really know why this is, but that was often how I felt.

Spending time with dad in Cape Town has been a great experience.

For both of us. In different ways.

Sharing a wonderful weekend with my best friends, drinking red wine in front of the fire with conversations about life, going on a road trip down the South African peninsula, taking a morning swim in the Indian Ocean and seeing the sun set in the Atlantic, sharing a sushi platter and drinking numerous cocktails with my friends on a fancy restaurant and finishing up on the dance floor of a Cuban club, having ouzo with the Greek owner and throwing porcelain plates on the floor “for good old times”.

To quote my dad: You will never be finished. But that’s ok. 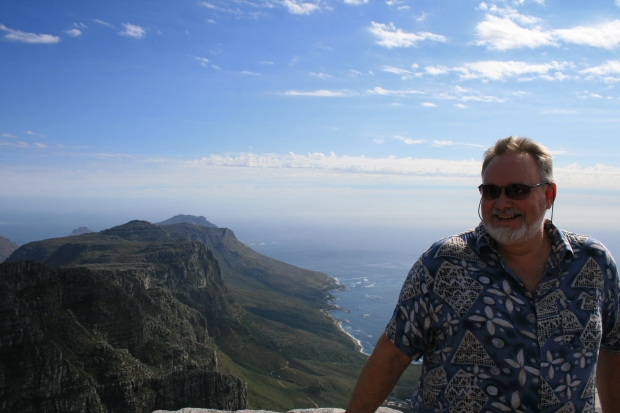 6 thoughts on “My father”