The snow whirled around today and I let the Xmas spirit slowly roll in and settle on my hat.

I took a stroll around the so called bohemian-chic area I now live in and while peeking into people’s windows I could confirm that Stockholm flats really match up to the pictures in interior design magazines. Buying a place in this area is of course not impossibly expensive if you get a loan, but you don’t really want to calculate on the cost per square metre. You could say that people living here are on pretty solid financial ground. Then there are of course the hipster shops and hangouts, the trendy second-hand stores and the prominent music bars and multi culture restaurants. Just in an area of two minutes from my door there is an Indian, a Persian, a Czech, a Thai, a Japanese and a Greek. But it’s the Swedish touch of things that make em cool.

This used to be simple workers’ houses and still in some parts of the area the old charm is preserved. I brought my camera and took some pictures.

The other night, just outside the same house, a man was shovelling snow to get to his door. We talked for a while about all the snow that had fallen. Then he asked if I wanted to come in for a cup of tea. It was a sincere invitation, still I was a little taken aback. It was around ten o’clock at night and as much as I want to see the best in people, I politely turned down his offer. I could tell he thought I had gotten the wrong idea about it and he started explaining…a tea in the kitchen, that is…don’t get me wrong…but I said thanks and headed home, feeling slightly guilty. Have I been so effected by this cold city or is this just the reality of our world today?

What world have we come to, when we can’t even offer a neighbour a cup of tea?

When we don’t let people into our perfectly designed houses? How many people are not suffering, or feeling lonely this time a year, while others get caught up in the consumption carousel, spending money on expensive material things that people will have forgotten about in a year?

In my family, it’s always been about the food. That is why eatable things are always on the wishing list. Today I went to my favourite Deli – Cajsa Warg, where a friend of mine works. I got the whole staff engaged in my pursuit for the perfect gifts for my grandmothers. After an hour I had set together two wooden boxes of delicacies.

My mom, who is the most generous person I know, asked me what I wished for Xmas, but I couldn’t come up with one thing. World peace? That the world’s leading politicians reaches a good agreement at the UN Climate Conference in Copenhagen? That my loved ones stay healthy and happy?

I have everything I need. And in exactly a week I will be on a four hours’ bus, heading home to a house where the fridge is crammed with home made goodies, where the couch may be old and used, but the door is always open. 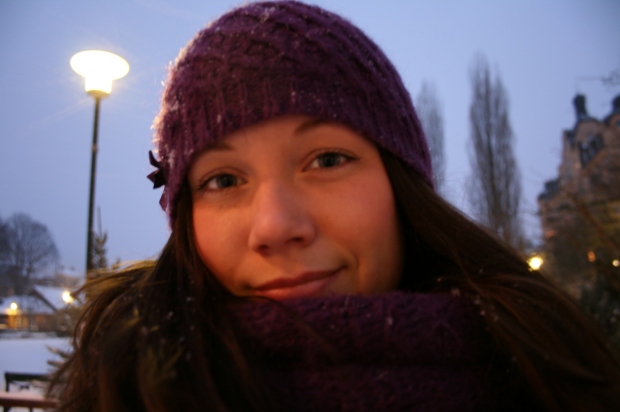 ← Alanis Morissette – That I would be good
Our deepest fear →