It is midnight in Reine and I’m sitting in the kitchen of my wooden fishermens hut, the rorbu as it is called in Norwegian. It looks like midday because of the light outside but the blue and pink clouds behind the mountains give away the early hour.

This is the most beautiful spot I have seen in my life!

My body is weary from walking and my eyes are sore from the sun and the breathtaking scenery.

But I can’t sleep. I am too excited to be here, to be alive!

Let me tell you more about my trip to paradise. From the night train I came into Narvik around noon on Thursday. Some guys gave me a lift to the bus station where I hung around for a few hours before catching the coach to the Lofoten islands. At this point, I still hadn’t decided where I would get off, but a man in the bus said he was staying at a dried cod fish museum and hostel down in Å, the furthest south you can get in the archipelago. I said, “that’s where I’m going” and the bus driver said “akkurat, that’s 690 NOK” (about twice as much as I had expected – but then again, Norway is the fifth most expensive country in the world)

The bus ride lasted for 7 hours but went by in a flash – literally. I was taking pictures through the whole scenic route. Had someone told me it would only get more and more pretty the further down you go, I would have saved some camera battery. It ran out just as we were rolling into Reine, known as one of the most beautiful villages in the world.

But there have been plenty of photo opportunities today. I left Å which was a cute little spot – despite the smell of dried cod – and travelled back to Reine to check into my rorbu. While chatting to the staff (many of them being Swedish) one of the girls mentioned that the diving and seal safari guy across the road was just getting for a three hours rib boat tour along the coast. I walked over and signed up. (Another 750 NOK + 1000 NOK for the rorbu – money has little wings in this country)

It was great to breathe the fresh air and watch the towering mountains on one side and the open Arctic Sea on the other. We caught a glimpse of a few eagles and seals but were told that killer whales had been spotted in the same bay, only a day before.

When I got back in the late afternoon I took a stroll around the cabins. Two Englishmen were sitting down at the pier drinking beer and I joined them. A few hours later, sun still shining bright, we were listening to Bob Dylan from an iPhone, talking about life and eating pizza and fries – that for some odd reason tasted like dried cod fish… 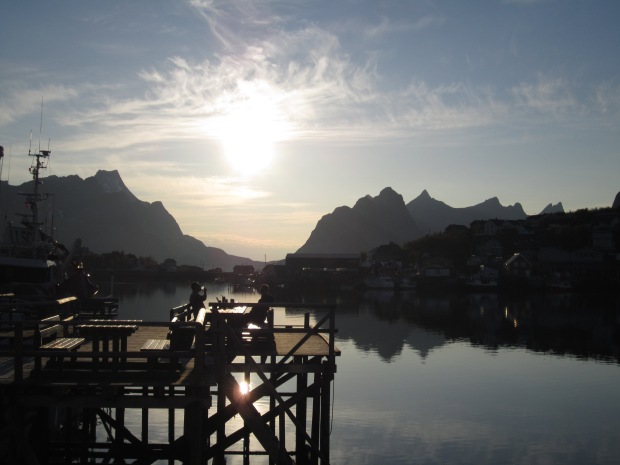 I guess not even paradise is perfect!

← The sparrow has landed
(Hitch) hikes and rock climbs →